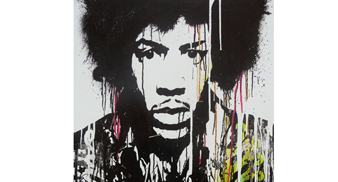 Jimi Hendrix, Bob Dylan and The Beatles are just some of the familiar faces who will be the subjects for a one-day-only graffiti exhibition ‘LOAD’ which will take place under the Royal Albert Hall on June 22.

The 10ft murals have been spray-painted in the legendary venue’s loading bay, three floors underground, and will tell show off some of the icons that have played the RAH’s stage over the past 138 years.