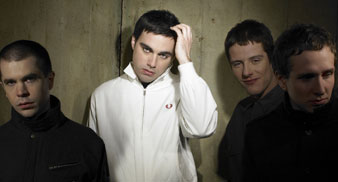 Hard-Fi have announced a new monthly podcast, “Rockin’ In The City” available through their website and iTunes now.

The Staines rockers are giving fans the chance to follow them from their sold-out five night residency at London’s Brixton Academy earlier this year through to making their new album, the follow up to 2005’s Mercury Music Prize nominated “Stars of CCTV.”

As well as live footage, exclusive interviews with the band reflect back on the whirlwind success of the past 18 months whilst looking to the future.

Footage of Hard-Fi recording their highly anticipated second album will also be made available in future podcasts.

For any fans who want to find out more about Hard-Fi’s influences, probe deeper into life on the road, or even have an input into the recording of the new album, they will be able to interact with the band via email after each podcast is made available to download.

For a taster of what to expect from Richard Archer’s boys, try this teaser: