Country legend's 'Ghost On The Canvas' is released in August 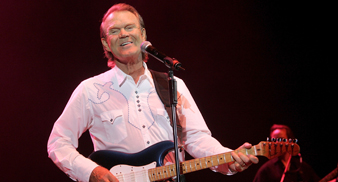 Jakob Dylan and members of Guided By Voices and The Replacements have written songs for the final album from country legend Glen Campbell.

The ‘Wichita Lineman’ star is bowing out of the music industry after a six-decade career, but not before releasing one final album, ‘Ghost On The Canvas’. The album is released on August 31.

Songs for the record have been written by Bob Dylan‘s son Jacob, alongside Robert Pollard from Guided By Voices and Paul Westerberg from The Replacements. Also turning up as guest musicians are Billy Corgan, The Dandy Warhols, Chris Isaak, Rick Nielsen, Brian Setzer and Dick Dale.

As well as his extensive solo career, Campbell was part of the session guitar team the Wrecking Crew, who were the ensemble of choice for Phil Spector. He also played on albums by Frank Sinatra, The Monkees and Dean Martin, as well as guesting on The Beach Boys‘ seminal ‘Pet Sounds’.

In his own right, he has sold 45 million albums and enjoyed 81 top ten hits, hosted a TV show with a global audience of 50 million, has been inducted into the Country Music Hall Of Fame and also donated a song to the original True Grit.

The tracklisting for ‘Ghost On The Canvas’ is: