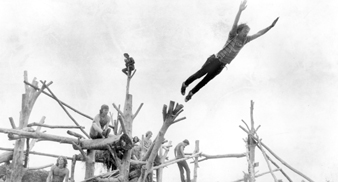 Woodstock – 3 Days of Peace And Music’ , the 1970 Oscar winning film about the 1969 festival, has been revamped and re-cut for release as a 4 hour Director’s Cut to celebrate the 40th anniversary this June.

The film, and a documentary spanning four discs now boasts two hours of previously unseen footage from the festival; including 13 artists who didn’t make an appearance in the original film.

You can now see The Grateful Dead, Creedence Clearwater Revival, Santana and The Who in 5.1 audio in the new archival footage.

The Warner Home Video release will be available as a 4-disc DVD and 2-disc Blu-ray on June 15.

For more on Woodstock, see the latest (May) issue of Uncut for an 8-page special, where the survivors of the notorious mudfest speak.