Grant Lee Phillips To Play One Off Gig

He will showcase songs from new album Strangelet 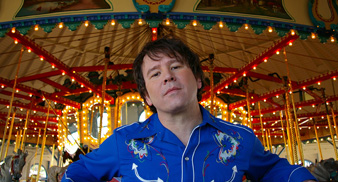 Grant- Lee Phillips is to perform a rare one-off show at Camden Dingwalls on August 7.

Accompanied by a full band, the former Grant Lee Buffalo front man will be performing tracks from throughout his musical career, as well as playing songs from his fifth solo studio release “Strangelet.”

The new album written, produced and engineered by himself, even sees Phillips play all the instruments too. Everything from piano and bass to baritione horn and ukelele.

Speaking about the gigs he is performing this year, Phillips says: These shows are gonna’ pack a wallop. For me, the stage has always been a place where the songs take on another life. There’s no confinement, no clock and yet you’ve got one shot to say your piece – there’s no take 2. I kind of thrive on that urgency.”