Gorillaz set to record and release new track in February 2012

Band have signed up for Converse's 'Three Artists. One Song' series 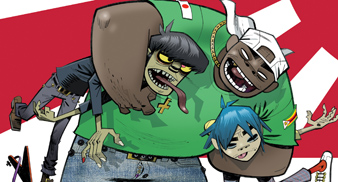 Gorillaz have announced that they will be recording a new track in February next year as part of the Converse shoe company’s ‘Three Artists. One Song’ series.

The series has recently featured brought together rapper Soulja Boy, Andrew WK and Matt And Kim to record a collaboration and also saw Graham Coxon, Paloma Faith and ex-The Coral guitarist Bill Ryder-Jones collaborate to record a track together in 2010.

The track will come out to coincide with the release of a new collection of Converse shoes, which have been created in association with Gorillaz and feature a heel tab created by the band’s design guru Jamie Hewlett.

The band will also host a special club night next month. The night, which is under the name Gorillaz Sound System, will be held at London‘s 100 Club on December 1.

To find out more information, to view the range of shoes and for more details about the night, visit Converse.co.uk.