A pan-global hoedown in deepest Wiltshire... 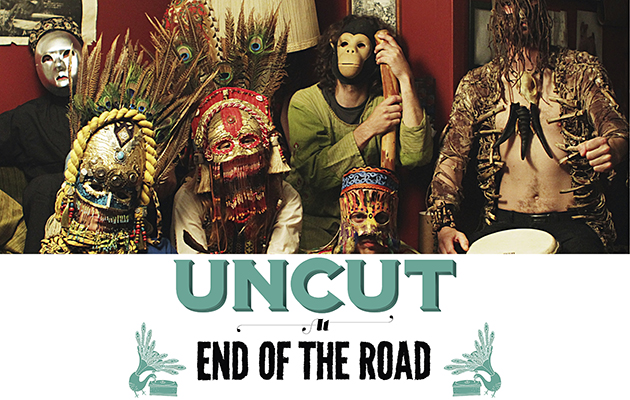 It is one of those days when it might be tempting to write about the indomitable staunchness of the British festival audience – and the End Of The Road audience in particular – rather than the music they are here to see. As one more raincloud descends on the Larmer Tree Gardens, a great surge of people head regardless to pay homage to Goat, a band whose psychedelic mulch of ritual party music is hugely useful under the circumstances.

Much of the Swedish band’s taste for ethnomusicological forgery is played down tonight, with the desert blues, hi-life breaks and Ethiopiques shuffles generally overwhelmed by a frenetic blend of guitar grunge disco, copious wah-wah and some fruitful long term study of Maggot Brain. It’s a cunning and infectious blend, programmed to work well in tough environments: at one point, a bassline akin to “Block Rockin’ Beats” cuts through the euphoric murk.

Nevertheless, a few qualms about Goat remain, not least their robes and masks, dubious signifiers of ritual and ‘otherness’ that could be perceived as the same kind of problematic festival appropriation as Native American war bonnets. The lead vocalist’s post-punk yowl can, too, disrupt the flow of all the pageantry and stomp – though perhaps that’s the point of such a skilfully eclectic band. Best accentuate the open-minded joy of it all, and play down the pants element.

Under cover, meanwhile, Cat’s Eyes have brought four backing singers and large lion to the Big Top. Such are their particular gifts for appropriation, it takes about three minutes to work out they really are playing the Twin Peaks theme, rather than ripping it off. After that, the general ambience is of unstable girl-group gone goth. A couple of songs sung by Faris Badwan, however, hint at a fusion hitherto unexplored: the Jesus & Mary Chain/Procol Harum crossover, anyone?