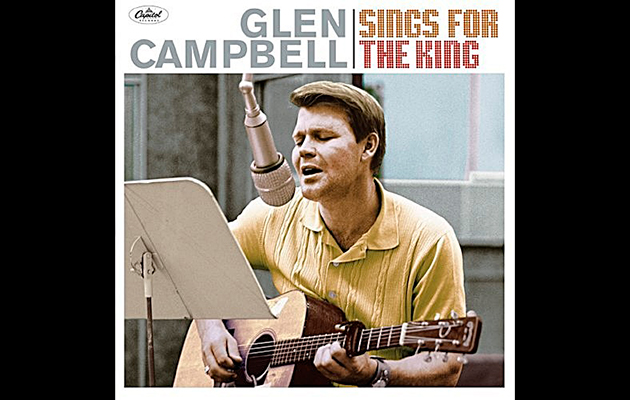 From 1964 to 1968 — in between recording sessions with the Wrecking Crew, touring with the Beach Boys, and recording his own albums — Glen Campbell was recruited to demo a number of songs for Elvis Presley, so he could decide if he wanted to record them.

These recordings have recently been unearthed and 18 of them will be released together for the first time as Glen Campbell Sings For The King on November 16 via Capitol/UMe.

Sings For The King includes songs written by Ben Weisman and Sid Wayne. Weisman is significant for having written the most songs recorded by Elvis than any other songwriter in history. Weisman and Wayne turned to Glen Campbell who had an uncanny ability to match Elvis’s key and even mimic his delivery, to record fully fleshed out studio versions that they could present to Elvis for his recording consideration. The songs were discovered by Executive Producer Stephen Auerbach who found the 50-year-old recordings on long-forgotten reel-to-reel tapes in a storage space belonging to his uncle-in-law, Ben Weisman.

Sings For The King will be released on vinyl, CD and digital formats, available to pre-order here. There will also be a limited edition 180-gram clear vinyl version available exclusively at the official Glen Campbell site. Check out the tracklisting below: