The jazz singer has died, aged 80 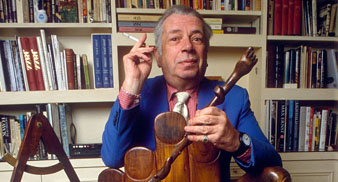 Legendary jazz and blues singer, George Melly passed away this morning, at his home in London at the age of 80.

The singer refused lung cancer treatment after being diagnosed in 2005 and collapsed on stage in January this year. However he continued to perform, with his last public appearance just last month.

Melly’s final performance was at the 100 Club in London on June 10 where he raised money for Admiral Nurses, part of the charity For Dementia, a disease that he was also diagnosed with.

Born in Liverpool in 1926, Melly lived a life full of creativity and excitement. As well as being a much loved jazz singer for over 60 years, Melly was also a lecturer on art and history and a television and film critic as well as a writer.

Influenced strongly by Bessie Smith, Melly has performed as part of Digby Fairweather’s band and Mick Mulligan’s band as well as making a long lasting solo career for himself.

His spectacular jazz performances were always intertwined with outrageous jokes and humerous anecdotes for which many fans will remember him.

Clothed in vibrant suits and extravagant cowboy hats, the singer was also a keen fisherman (which led him to buy part of the River Usk in Wales) and a dedicated lover of fine art, particularly Surrealism.

Although the singer performed up until the last few weeks of his life, the highlight of Melly’s musical career was during the mid-seventies when he released three albums in quick succession.