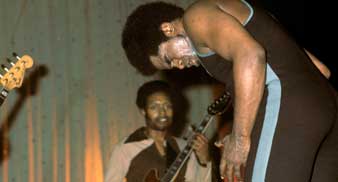 Parliament and Funkadelic guitarist Phelps ‘Catfish’ Collins has passed away following a battle with cancer. He was 66.

The Cincinnati guitarist was a key part of the funk scene in the late ’60s and early ’70s, playing with James Brown before joining Parliament and Funkadelic.

With Funkadelic, Catfish played on albums including ‘America Eats Its Young’ (1972) and tracks like James Brown‘s ‘Get Up (I Feel Like Being A) Sex Machine’ (1970).

His younger brother and fellow musician Bootsy Collins hailed him as the “happiest fellow I ever met on this planet” following the news of his death, reports Rollingstone.com. He added that his world “will never be the same” now that he has died.

Collins‘ death comes less than two months after Funkadelic‘s guitarist Gary Shider, who passed away from cancer on June 16.