Freed Pussy Riot member Yekaterina Samutsevich has vowed to continue the group's fight against Russian authorities. Samutsevich was released from jail yesterday (October 10) after a Moscow court accepted her appeal on the grounds that she had been thrown out of Moscow's main catherdral before she could remove her guitar from its case for the Pussy Riot's "punk prayer" protest against Putin. 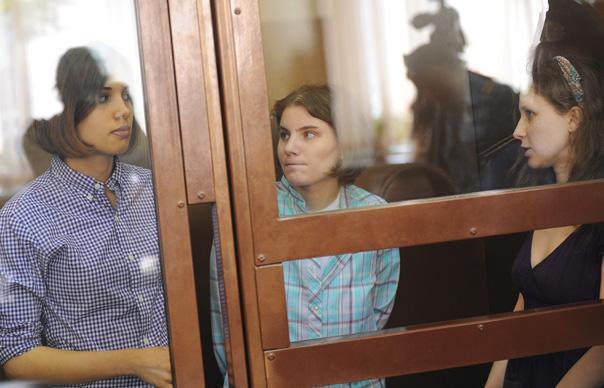 Samutsevich was released from jail yesterday (October 10) after a Moscow court accepted her appeal on the grounds that she had been thrown out of Moscow’s main catherdral before she could remove her guitar from its case for the Pussy Riot’s “punk prayer” protest against Putin.

“We are not finished,” she said in her first interview since leaving jail. “We have to act in such a way so that they (Russian authorities) do not learn about the concerts ahead of time, and be caught and jailed afterwards,” she added.

Three members of Pussy received two-year prison sentences on August 17 after being found guilty of hooliganism motivated by religious hatred after they were arrested following an anti-Putin gig in Moscow’s main cathedral. While Samutsevich has been freed on appeal, the other two women – Maria Alyokhina and Nadezhda Tolokonnikova – have had their jail terms upheld.

Although two of Samutsevich’s bandmates remain behind bars, she says she has reunited with other members of Pussy Riot and will continue to take part in the movement that cast a global spotlight on Russia’s political situation, telling journalists that Pussy Riot is “more united than ever … fighting for the freedom of Masha and Nadia!”

In an interview last night with CNN, Samutsevich said: “We are not finished, nor are we going to end our political protest…The situation in the country has deteriorated since our performance and the trial itself is a testimony to that.”

Although she said she will be “more cautious” in her actions going forward, her “negative” attitude toward Vladimir Putin and what she calls his “mega authoritarian project” remains unchanged.