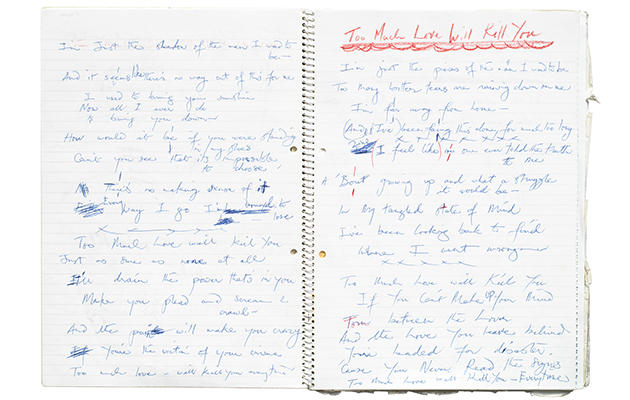 Freddie Mercury‘s lyric notebook is up for auction.

The notebook was used between 1988 and 1990 and includes the original lyrics for “I Want It All“, “Too Much Love Will Kill You” and ‘The Show Must Go On“.

It will be sold by Bonhams at their upcoming Entertainment Memorabilia sale, taking place at Bonhams Knightsbridge on June 29, 2016.

“Freddie Mercury was a brilliant musician, lyricist and performer,” said Katherine Schofield, Bonhams Head of Entertainment Memorabilia. “He once said of himself, ‘I am not going to be a star. I’m going to be a legend’, and indeed that’s what he became.

“The notebook was used by Freddie for writing his own songs, as well as noting down the words to songs written or co-written by guitarist Brian May. The lyrics, such as for ‘Too Much Love Will Kill You’, and ‘The Show Must Go On’, are both beautiful and sad, as on reflection, we know Mercury was battling HIV at the time. This knowledge makes the words all the more poignant.”