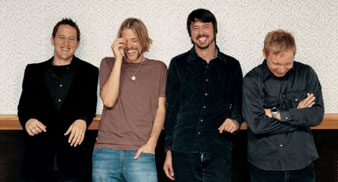 Foo Fighters have been confirmed to play a special show at Edinburgh’s Meadowbank Stadium on August 21.

The Grammy-award winning band fronted by former Nirvana member Dave Grohl will play the show as part of the seventh annual T On The Fringe festival, an off-shoot of the month’s world famous Edinburgh Festival.

The Kaiser Chiefs, currently number one in the UK album charts, will also play a headline show at the same venue, which this year has an increased capacity of 25,000, on August 24.

More acts are still to be announced as Dave Corbet, concert promoter for T On The Fringe says: “Over the past 7 years we’ve had some fantastic shows at T on the Fringe and we’re really pleased to announce today that we’ll be increasing the capacity [for] what will become the biggest shows in the history of the Edinburgh Fringe. We’ve got some more really exciting news for 2007 still to come for what we can assure you will be the best T on the Fringe yet.”