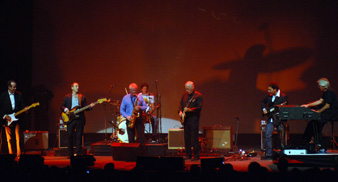 The film screening was attended by many artists and musicians, including Led Zeppelin‘s Robert Plant.

Prior to the film which was recorded last year, David Gilmour came on stage and performed ‘Castellizon’ – the guitar solo from his solo album ‘On An Island‘ on a dark stage with just a spotlight on his guitar.

After the ‘gig’ (which included an immense laser light show in the auditorium for ‘Echoes’) finished, Gilmour came back onstage to take questions from the audience and fans around Europe – to whom the Q&A was being webcast live.

If the guitarist could have made any song of recent times, it would have been Gnarls Barkleys‘ ‘Crazy’ which he said was simply ‘an amazing track’ – though ‘he doesn’t keep up with new music that much.’

Gilmour said: “I’m far more likely to be moved by Bob Dylan and Leonard Cohen than anything – they’re the people that I’m truly impressesd by.”

Doing the ‘On An Island’ tour has been ‘immense fun’ he said. “It takes up all of my time, and I’m not quite done with it yet.”

The former Pink Floyd guitarist was joined onstage at the end of the Q&A session by former bandmate Rick Wright as well as a multitude of other musicians for ‘Island Jam‘.

Roxy Music‘s Phil Manzanera played alongside musicians Jon Carin who has played with Floyd as well as with Gilmour and Waters solo, Dick Parry (Floyd sax), Guy Pratt (Floyd / David bassist) and Crosby & Nash drummer Steve DiStanislao – who were all called out of the audience to plug in and play.

The double-disc David Mallet directed film ‘Remember That Night’ including two and half hours of bonus footage is released on September 17 through EMI Records.