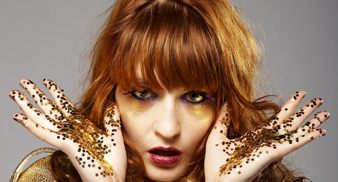 Florence And The Machine frontwoman Florence Welch has admitted she is hoping to convince author Brett Easton Ellis to write into one of his books.

The singer admits she is envious Bat For Lashes got the treatment in his recent novel Imperial Bedrooms.

The writer behind the likes of Glamorama and American Psycho often includes musical cameos in his novels, both in the form of songs his characters are listening to, and occasionally having rock stars appear as themselves.

Imperial Bedrooms is a sequel to his debut Less Than Zero, and both titles were inspired by the names of Elvis Costello songs. In the new release, one of the characters listens to Bat For Lashes music in the course of the novel, and Welch told The Independent she hopes her band could feature one day too.

“[We don’t get a mention in the new book] but Bat For Lashes does, which is impressive,” Welch declared at the London launch party for Imperial Bedrooms. “Maybe [I could feature in the next one]. I guess I’d better go and introduce myself!”