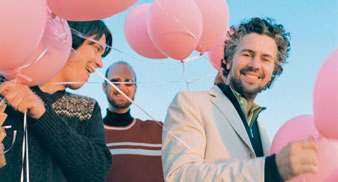 A Broadway musical version of The Flaming Lips LP “Yoshimi Battles The Pink Robots” is to be co-written by the band and West Wing creator Aaron
Sorkin.

The TV writer’s rep yesterday (March 20) officially confirmed Sorkin’s involvement to write the script based on the 2002 album prompting Lips front man to proclaim ”Maybe that means they’ll need to build a stage with lots of hallways on it. “It will be a giant tube that’s always moving!”

Also onboard for the musical is Des McAnuff. The Tony-Award winning director has previously worked on The Who’s “Tommy” stageshow, and is a massive fan of the Lip’s record.

Coyne told Entertainment Weekly that “When Des heard the record, he heard a lot about death and loss and triumph of your own optimism… he had an emotional attachment to it.”

It was McAnuff who pursued the idea of putting together a musical using their spacey back catalogue with the band.

Details of any plot are not specific yet, and the musical is likely still a couple of years away from completion.

Coyne adds a final note of optimism, by comparing the Yoshimi concept to Terry Gilliam’s “Brazil.”

Coyne says: “There’s the real world and then there’s this fantastical world,” explains Coyne. ”This girl, the Yoshimi character, is dying of something. And these two guys are battling to come visit her in the hospital. And as one of the boyfriends envisions trying to save the girl, he enters this other dimension where Yoshimi is this Japanese warrior and the pink robots are an incarnation of her disease. It’s almost like the disease has to win in order for her soul to survive. Or something like that. Sounds bizarre, but so does a musical about a ”deaf, dumb, and blind” pinball virtuoso. That one turned out okay.”