Sir George Martin attends a gala concert in his honour 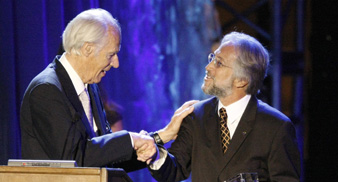 British music legend Sir George Martin, most famous for his work as composer, arranger and producer of all of The Beatles‘ original records has been honoured with a ‘lifetime’ Grammy honour in Los Angeles this weekend (July 12).

Martin, pictured above, recieved his career honour at the Annual Grammy Foundation ‘Starry Night’ charity gala dedicated to him from The Recording Academy’s president Neil Portnow.

The gala concluded with a concert with performances from singers Tom Jones, Burt Bacharach and Jeff Beck amongst others, covering popular songs from Martin’s career.

Martin said as he collected his award: “Paul and Ringo can’t be here, because they’re doing their own tour. They’re workaholics. I can’t understand why, but they are.

He added: “I miss a lot of people. I miss so many people who have died on me. God knows I’m old enough. But younger people have left the scene, and I miss them, as you do. Great people; John and George particularly.”