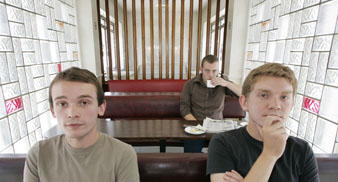 Field Music, who are just coming to the end of a short UK tour, have confirmed four more dates for 2010.

The Sunderland three-piece, formed by brothers David and Peter Brewis, will play the shows to coincide with their third album, ‘Measure’, released on February 15th.

Since Field Music’s last effort ‘Tones Of Town’ in 2007, which comes highly recommended by Uncut, the Brewis brothers have both been busy on equally acclaimed solo projects.

David made an album under the name School Of Language, whilst Peter recorded as The Week That Was, with both albums released in 2008.