Pete Wentz says 'this is not the election to be cute' 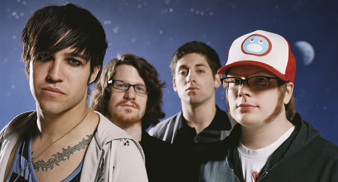 Fall Out Boy have announced that they are to postpone the release of their new studio album ‘Folie A Deux’, which originally was meant to be released for ‘fun’ on the same day as the US presedential election next month (November 4).

In an about-turn, the band led by Pete Wentz have now posted a message on their website to say that even though hosting the launch of the disc on the same night reflected the “social commentary” and was “relevant to the candidates”, they felt it was not the right thing to do. Adding that “This is not the election to be cute. This is the most important election of our time.”

FoB also said on their post: “We felt as though rather than making a commentary we were only riding the wave of the election. This seemed less and less like what we intended to do and more of a gimmick.”

The band add in their message: “While we have all individually expressed our positions on the candidates that we support we feel that many of the interviews and press for the record have skewed us into a partisan band. While it may be obvious where we stand. We never intended to be the band that shoved our ideas down peoples throats. We only hope people look at the bigger picture and investigate the issues further on their own.”

Folie A Deux will now be released on December 16, although the band intend to release some new songs through iTunes in the meantime. They also plan on playing some intimate club shows in US cities in November, tickets for which will only be available on the day.

Fall Out Boy’s previous album, last year’s Infinity on High, spawned their biggest UK hit to date with “This Ain’t A Scene, It’s An Arms Race”.