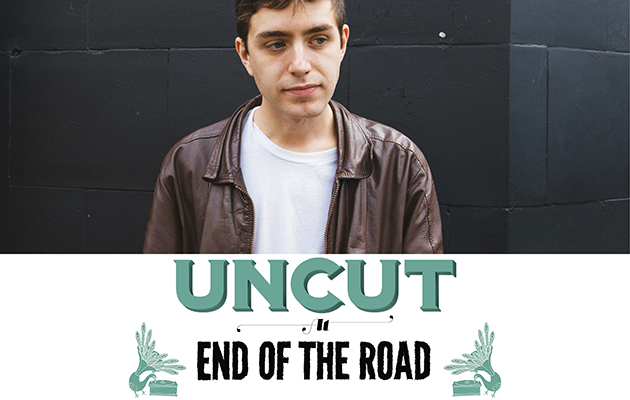 Fifteen minutes or so before Ezra Furman and The Boy-Friends take the Garden Stage as Saturday’s headline act, the PA is pushing out some high gloss soul-pop. Chic, Donna Summer, The Jackson 5, OutKast’s “Hey Ya” and Prince. Even Britney’s “Toxic” gets an airing, and it’s pretty wise programming. The crowd is heavy and there is certainly an ‘up’ vibe here in among the trees, a clammy wet night after a sodden afternoon. The expectation is fun. They want energy, rather than introspection.

Ezra Furman’s been playing impromptu spots across the festival, but this is his scheduled headlining slot. There is a genuine clamour around this artist right now, and you feel it in the audience as he makes the entrance, back to the masses, in cocktail dress, pearls, and Jayne Mansfield stockings. His most albums Day Of The Dog and Perpetual Motion People are intense, enveloping experiences, for sure, but it’s on stage where this guy really shows what matters to him. That’s the raw, visceral, unexpected thrill of a live show, feeding off the energy from the sea of heads beyond him.

“Teddy I’m Ready” – from the Bella Union EP ”Big Fugitive Life” released in July – is where he begins the assault. Dedicated to Mississippi man Ted Hawkins, it’s a biting speed-freak piece of rock’n’roll, and immediately, there is a little bit of mayhem. There are an explosion of influences in Ezra Furman’s music: 50s Cadillac rock’n’roll, southern soul, windmilling power pop, and, the filthy punk attack of 80s forebears The Violent Femmes and The Gun Club.

The Boy-Friends are a great, tight, muscular band, with saxophonist Tim Sandusky a focal point and driving force for some heavy, hungry music. He’s Clarence Clemons to Furman’s Bruce, and the E-Street Band is a useful, if overused reference point. There is a feel of soul revue here, the brass honk – for that is the only permissible word to use – brings the party in every song.

As a frontman, Furman can magnetise his punters, with a mixture of intense confessional, and genuine right-back-atcha affection. “We’re gonna play some stuff we’re not so sure about,” Furman announces, but they sound pretty confident from here. “At The Bottom Of The Ocean” from Day Of The Dog dances on its twisted Kurt Vonnegut lyric and punishing Bo Diddley backbeat. The take it down a step with the Swordfishtrombones shake of “And Maybe God Is A train”. It’s a great version and Furman feels the lyric, intimately: “And maybe God is a boy, kneeling down in dirty gardens/And taking bugs apart with his hands/And maybe God is a boy, in a social situation/Trying to be tough like a man.” His voice gets hoarser and thinner over the show – hey, it’s got to be hard to keep this up, this long.

They accelerate through the back catalogue – “My Zero” and “Lousy Connection” fill the air, “ I’m Just A Little Piece Of Trash…” gets some genuine whoopage – until the clock must get punched. “Listen,” he implores, rather breathlessly, “I just wanna say that this festival, this country, is the greatest reception I’ve ever had in my life. THANK YOU FOR NOT DYING BEFORE TONIGHT!”

Melodramatic, maybe, but he’s flushed with pleasure here, at the response, at the impact of his music. Furman plays silly buggers about being too exhausted for an encore – like that’s not gonna happen – until the band launch into a groovy take on Jackie Wilson’s “Higher And Higher”, his favourite song, apparently. Like every other song, the crowd love it, the high passion, and power, until Furman is carried, theatrically, from the stage, to something approaching joy.