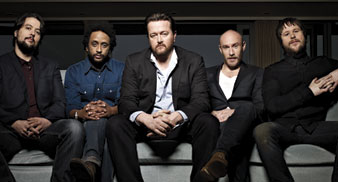 Elbow have been chosen to record the BBC‘s soundtrack for the London 2012 Olympic Games.

The band, who released their fifth album ‘Build A Rocket Boys!’ earlier this year, have composed a six-minute long track, which will be used by the BBC as the theme for all their Olympic coverage.

Speaking to BBC News, Elbow frontman Guy Garvey described recording the track as “a real responsibility” and revealed that the band were “knocked out” at the chance to be involved.

Garvey said: “We are knocked out to be involved and it’s been quite a challenge. We have feelings of real responsibility as we will be the soundtrack to so many images of personal sacrifice and endeavour while the nation roots for and celebrates with Team GB.”

Garvey has previously said that Elbow have begun work on the follow-up to ‘Build A Rocket Boys!’, but has not said when they hope to complete or release their sixth studio album.