Edwyn Collins: The Possibilities Are Endless

“I’m struggling to come to terms with who I am,” admits Edwyn Collins early on during James Hall and Edward Lovelace's documentary. 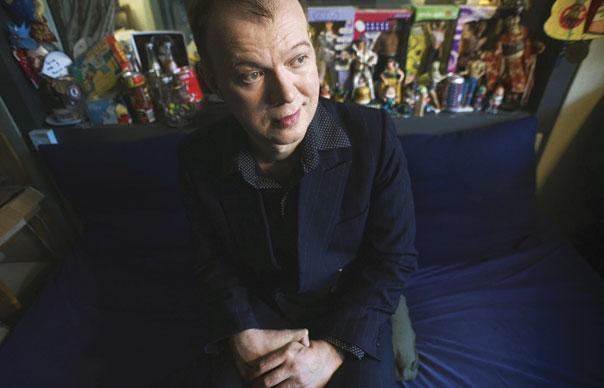 “I’m struggling to come to terms with who I am,” admits Edwyn Collins early on during James Hall and Edward Lovelace’s documentary.

Accordingly, this is a film that is concerned almost exclusively with Collins’ life since he suffered a hemorrhagic stroke in 2005. It presents its subject via a number of enterprising methods; not all of them conventional. It’s a better piece for it. The film begins with static shots of a remote Scottish landscape – fields, sky, sea – which gradually coalesce into something less abstract. We learn this is the terrain around Helmsdale, the Scottish coastal village beloved by Collins and his wife, Grace Maxwell. Just as we attempt to connect these random images, so we must assume Collins himself struggled to make sense of the facts of his life after his stroke. Hall and Lovelace then move down to London, where we see Collins at home, surrounded by his possessions. He sits silently in his living room, considering a set of shelves on the wall opposite stacked with 7” singles. “It’s hard for me to communicate,” he explains. A final third witnesses Collins as he prepares to return to live performance, aided by the redoubtable Maxwell – who is on hand to strum her husband’s guitar while he forms chords on the instrument’s neck.

By avoiding a more conventional structure, Hall and Lovelace successfully sidestep the pitfalls this kind of film might have stumbled into. It is neither sentimental nor programmatic. Dramatised sequences – early shots in Helmsdale where local residents re-enact moments from Collins’ early life, or later when his own son, William, appears as a young man who falls for a girl he meets in a chip shop – add an additional layer to the experience. The film’s slow, digressive pace compliments Collins’ halting speech patterns perfectly, while the impressionistic, avant-garde collage (and Collins’ own ambient soundtrack) of the first third truffle out a strange beauty in the singer’s insular, fragmented state of mind.