Artworks contributed by Tracey Emin and Ronnie Wood amongst others 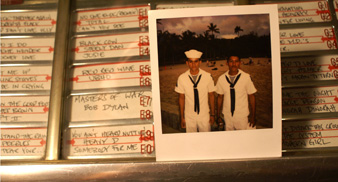 A new photographic exhibition inspired by Bob Dylan is to launch next month, the same day as the singer songwriter’s retrospective ‘Dylan’ is released.

With contributions from artists, actors and musicians such as Ronnie Wood, Tracey Emin, Patti Smith and Bryan Adams – each photograph illustrates what Dylan means to them personally.

The exhibition ‘Visions Of Dylan‘ will run for two weeks at Covent Garden’s The Hospital gallery, after which the prints will be auctioned to raise money for WARchild.

‘Visions Of Dylan’ has been curated by Suzanne Bisset in cooperation with Sony cameras. Each of the artists was supplied with a Sony SLR camera to take their Dylan interpretation photographs with.

The photographs will be available to view at Bob Dylan’s Official website Dylan07.com from October 1 too.

Fans will also have the opportunity to contribute their own photographic interpretations inspired by Dylan – they stand to win a Sony digital camera as well as the possibility of their picture being included in the exhibit.

Mark Ronson’s depiction of ‘Masters Of War’ is pictured above.