Doves and Magazine bring Manchester to the Electric Proms 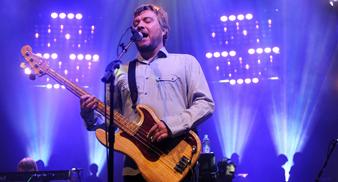 Doves adapted their back catalogue to be accompanied by the London Bulgarian Choir at their headline show at London’s Roundhouse venue on Thursday (October 22).

Performing the unique show as part of this year’s BBC Electric Proms festival, Doves led by Jimi Goodwin created special arrangements for the choir to sing.

Goodwin also explained that live set rarity, “Catch The Sun” was only dug out at the insistance of the choir singers. He told the crowd: “This next song we haven’t played for years. So basically the choir bullied us into doing it because they love the arrangement so much.”

Doves were supported by another hometown band, and their own musical inspiration, Magazine – who reformed this year.

See Magazine performing ‘Under The Floorboards’ here: (UK readers only)