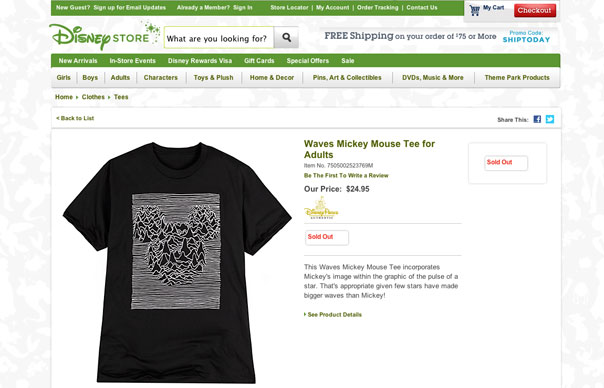 Pitchfork reports that a representative from Disney has said: “As soon as we became aware there could be an issue, we pulled it from our shelves and our online store to review the situation further.”

Peter Hook recently spoke to NME to say that he felt it was “quite a compliment” that Disney used Joy Division‘s ‘Unknown Pleasures’ artwork in the Mickey Mouse item of clothing. The former bassist with New Order suggested that the garment was a “tongue in cheek compliment” to the defunct band.

The T-shirt features the classic image of a pulsar, which was originally taken from the Cambridge Encyclopedia Of Astronomy. It was chosen by the band’s guitarist Bernard Sumner, with help from graphic designer Peter Saville.

Speaking to NME, Hook also confirmed that he had not given permission for Disney to use the image, adding that it was a legal grey area. “From a legal point of view, the image is in the public domain, as Disney know and, in a funny way, it’s quite a compliment for a huge conglomerate like Disney to pick up on a poor little Manchester band that only existed for a couple of years, it’s quite startling,” he commented. “I’m amazed they’re that hard up that they need to prey on little indie bands, but I get the feeling that someone may have done it as a tongue in cheek compliment.”

Hook continued: “I must admit, over the years I’ve become used to Mickey Mouse T-shirts, especially where Joy Division are concerned, because it was something that we never bothered with early on in our career and we’ve never attached much importance to that side of things actually. I’m used to bootleggers.”

The bassist added that though he spends a chunk of his time “policing” Joy Division bootlegs, all he usually required was that wannabe bootleggers made a contribution to an Epilepsy charity in memory of Ian Curtis, and called on Disney to do the same.

The T-shirt was priced at $24.99 but can no longer be purchased from the Disney store.