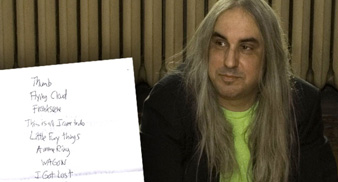 His voice was amazing and the songs electrified with an array of pedals – one man and an acoustic guitar never sounded so loud.

Mascis treated us to previews of songs from the new Dinosaur Jr LP “Beyond” – the first album to be made with the original line-up including Murph and Barlow in nearly 20 years.

The loudest cheers came when Mascis stumbled through some of the lyrics to some of Dinosaur’s most famous songs such as “Freakscene.”

Uncut.co.uk ran a competition to win a pair of tickets to last night’s show, and here winner Simon Bayliss tells us how his night was:

“Watching J is like a pilgrimage, he is a complete master of the guitar noise, he is every bedroom guitarists hero – like he was born with a guitar. The hair bands have Eddie Van Halen, we have J in his own world on stage. He speaks only to say thanks for coming out, almost like he could be playing in his lounge room, choosing songs which come into mind. Hard to describe his performance to anyone who doesnt know J Mascis. He makes a hell of a racket but makes it sound tuneful, experimental at times. I am so glad we have him performing after all these years . Love it, Adore him. Cheers.”


As previously reported, Dinosaur Jr will be making new album track “Almost Ready” available as a free download on March 5.