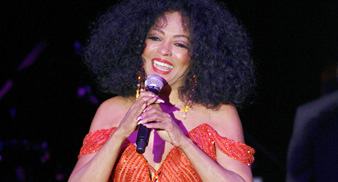 Diana Ross has been confirmed to play a headline concert as part of the Liverpool Summer Pops festival this July.

The veteran soul singer, who performed at the Summer Pops 2006 will return to perform on July 12 at the event’s brand new home, the 10,000 capacity Echo Arena in Liverpool.

Her appearance in Liverpool will be one of only two UK shows this year and she will be supporting her new album I Love You as well as singing tracks from her 40-year career. Ross says: “For me, every song on the album is a positive affirmation of love and this is the message I want to bring with the concerts, too.”

Counting Crows have also been confirmed to hedaline a show at the Summer Pops on July 8. The American rock band are about to release their eighth studio album Saturday Nights & Sunday Mornings – a double album worked on with Foo Fighters‘ producer Gil Norton.

The band are set to play Echo Arena on July 8. Tickets for the Counting Crows go on sale on March 7.

All other Summer Pops shows are on sale now. Details of artists confirmed so far are below.

Tickets and more line-up info is available by clicking here for www.accliverpool.com