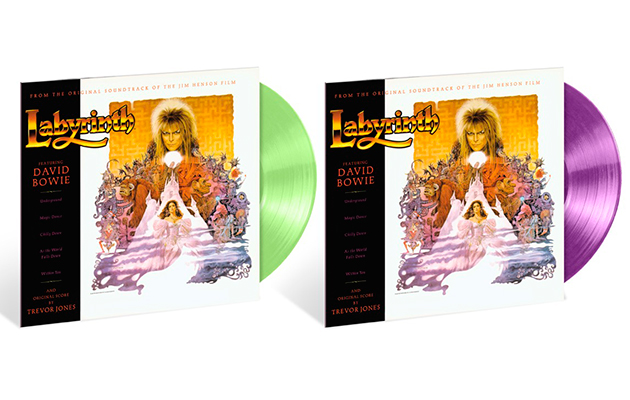 David Bowie‘s soundtrack to Labyrinth will be released on limited edition green and lavender vinyl on August 4 via UMe.

Directed by Jim Henson and executive produced by George Lucas, the film stars Bowie as Jareth, The Goblin King.

In a 1986 interview with Movieline, Bowie recalled his first meeting with Henson to discuss the film: “Jim Henson set up a meeting with me while I was doing my 1983 tour in the States, and he outlined the basic concept for Labyrinth and showed me some of Brian Froud’s artwork. I’d always wanted to be involved in the music-writing aspect of a movie that would appeal to children of all ages, as well as everyone else, and I must say that Jim gave me a completely free hand with it. The script itself was terribly amusing without being vicious or spiteful or bloody, and it also had a lot more heart than many other special effects movies. So I was pretty well hooked from the beginning.”

David Bowie is on the cover of the August 2017 issue of Uncut and inside we take a close look at The Dame’s 1960s and learn from friends, collaborators and accomplices how that decade shaped the years to come

Bowie wrote and recorded five original songs for the film, including “Underground”, “As The World Falls Down”, “Magic Dance”, “Within You” and “Chilly Down“. The 12-track soundtrack is rounded out with Trevor Jones’ score.

The reissue album has been remastered at Capitol Studios and includes the faithfully replicated original jacket and artwork, including the original EMI America logo and the printed inner sleeve featuring photos of Bowie from the film.