David Bowie: “He kept failing, then dusted himself down” 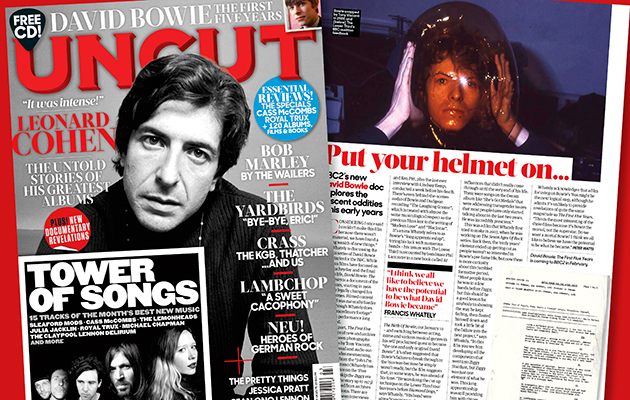 In the latest issue of Uncut – in shops now and available to buy online by clicking here – Whately shares his thoughts on Bowie’s pre-fame years.

“Most people know he was in a few bands before Ziggy, but this should be  a good lesson for anybody in showing the way he kept failing, then dusted himself down and took a little bit of the failure into the next project,” he says. “In this film you see him developing all the components that went into Ziggy Stardust, but Ziggy was just one element of what he was. This long apprenticeship was still providing him with things in the years before he died.”

David Bowie: Finding Fame features previously unseen interviews with Mick Ronson, Gus Dudgeon and Ken Pitt, plus the last ever interview with Lindsay Kemp, conducted a week before his death. There’s even behind-the-scenes audio of Bowie and Dudgeon recording “The Laughing Gnome”.

Other Bowie footage unearthed for the documentary includes footage previously believed to be lost of Bowie performing Jacques Brel’s “My Death” on the Russell Harty show.

Whately has also tracked down a copy of what many regard as the holy grail of Bowie TV spots – his performance of “Starman” on ITV’s Lift Off With Ayshea, a few weeks before the famous Top Of The Pops appearance. The original reels were wiped long ago but a fan recorded it on computer tape. That tape is currently being painstakingly restored in the hope that it can be shown in the documentary.

You can read much more about David Bowie: Finding Fame in the current issue of Uncut, on sale now with Leonard Cohen on the cover.