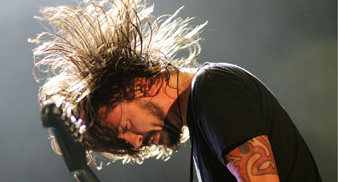 Dave Grohl has spoken of the time he, Nirvana bassist Krist Novoselic and live second guitarist Pat Smear played ‘Smells Like Teen Spirit’ for the first time in 17 years.

Speaking in today’s Observer (June 26), Grohl recounts the occasion that, during a run-through for a Foo Fighters gig, the ex-Nirvana musicians found themselves revisiting their most famous song.

“Krist is on bass, Pat‘s on guitar. I’m on drums,” Grohl explains. “Krist says, ‘You wanna run through some oldies?’ Me and Pat look at each other. I mean, that’s something I’ve never considered before. I was like ‘OK.’

“Krist says, ‘Fuck it, let’s do ‘Smells Like Teen Spirit’. And Pat starts playing and we kick into it. I haven’t played that drumbeat in 17 years.”

He concluded, “It was like… a ghost. It was heavy.”

The studio manager was the only other person to hear the rendition, on which nobody sang.

The 20th anniversary of Nirvana‘s album Nevermind will be celebrated with a ‘Super Deluxe Edition’.

The seminal album was originally released on September 24, 1991.