Band are playing in London on Saturday (October 29) 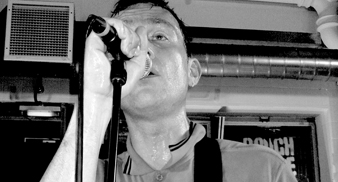 Damon Albarn has named his new band with Flea and Tony Allen Rocketjuice And The Moon.

The Blur and Gorillaz man is due to make his live debut with the Red Hot Chili Peppers man and The Good, The Bad And The Queen cohort on Saturday (October 29) at the Barbican in London.

The performance is taking place as part of the Another Honest Jon’s Chop Up! event, which will also see the likes of Malian singer Fatoumata Diawara, Hypnotic Brass Ensemble and Detroit techno man Theo Parrish appear.

Rocketjuice And The Moon have also confirmed their debut album, which is due to be released in the new year, will be self-titled.

Speaking to the Irish Times, Albarn explained that the band didn’t come up with the name themselves, commenting: “Someone in Lagos did the sleeve design and that’s the name he gave it, which suits me because trying to find a name for another band is always tricky.”

Along with the Rocketjuice And The Moon date, Albarn is also playing two gigs with The Good, The Bad And The Queen at the capital’s Coronet venue on November 10, their first live show since 2008.