CUT of The Day: Led Zeppelin Reform For Live Aid

Check out the action, then Page, Plant and John Paul Jones talk about reuniting for a good cause 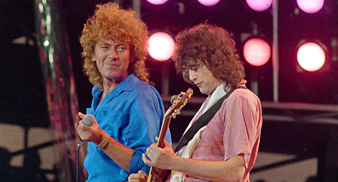 CUT of the Day: September 12

Ahead of this afternoon’s Led Zeppelin announcement to reveal what their reunion plans will entail – Uncut has been checking out what happened at a previous brief reformation.

Like today’s expectations that Page, Plant and John Paul Jones will reunite only for a one-off charity gig – check out the footage below from when the trio performed in Philadelphia for Live Aid in 1985.

The third clip is a great video interview with the band – as well as as Phil Collins, who sat in for drums that day.

Page and Plant are quite lucid about their intentions to collaborate for a good cause.

Come back to uncut.co.uk after 4pm when we will have more details about Led Zeppelin’s reunion 2007.


Interview with Mtv after the Live Aid show, so long ago — Pepsi is called Pepsi-Cola!: