Crosby, Stills, Nash and Young Film To Premiere This Month 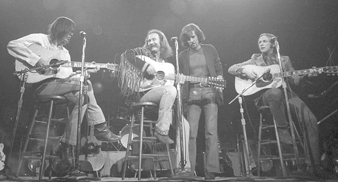 Crosby, Stills, Nash & Young are the subject of a new documentary that receives its world premieres later this month at the Sundance Film Festival in Utah.

Called ‘CSNY Déjà Vu’, it’s directed by Neil Young under his Bernard Shakey alias. The film takes place against the backdrop of the supergroup’s 2006 Freedom Of Speech Tour, during which the band were joined by Mike Cerre, a veteran correspondant of the Iraq and Afghanistan conflicts, who conducted many interviews with CSNY fans about the war in Iraq and the Bush administration.

The film, which is expected to get a full theatrical release later in the year, also features music from Young’s 2006 Living With War album.

Young has directed films before under the Shakey pseudonym, including Journey Through The Past, Human Highway and Greendale.

Another major music documentary, Patti Smith: Dream Of Life, is also scheduled to screen at Sundance.

More information on the Sundance Film Festival can be found here: www.sundance.org/festival