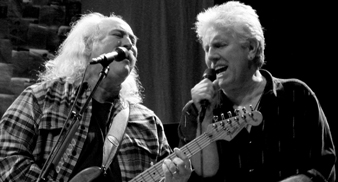 Crosby, Stills and Nash are set to play this year’s Glastonbury Festival, confirming their appearance on their band website Crosbystillsnash.com.

CSN are scheduled to play the Somerset festival on Saturday June 27, although it is very unlikely that they will collaborate with previously announced festival headliner and former bandmate Neil Young, who will appear on a different night.

Glastonbury’s other headliners are Bruce Springsteen and Blur.