Or so says Jack Bruce, anyway 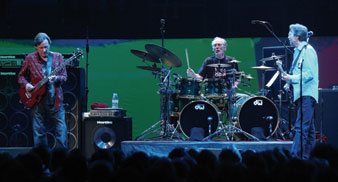 Jack Bruce has claimed that he will reunite with Eric Clapton and Ginger Baker as Cream this summer.

The bassist suggested that Cream will play one or more shows this summer. “It came up we’re doing something if I wanted to. Obviously, I’m not going to be the one to say no,” Bruce said, according to the Associated Press.

Cream last played together for a series of shows in 2005, after a hiatus of nearly 40 years. The concerts were widely acclaimed, but relationships between the three members remained difficult.

Bruce was talking at the first day of the Rock’n’Roll Fantasy Camp, an exclusive and highly expensive opportunity for members of the public to play with legendary musicians. Besides Bruce, other tutors on the course include fellow bassist and ex-Rolling Stone Bill Wyman, and Deep Purple keyboardist Jon Lord.