'I own Nirvana,' says Hole frontwoman after onstage meltdown 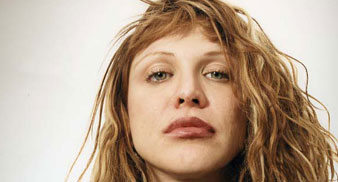 Courtney Love has slammed Foo Fighters singer Dave Grohl in the aftermath of her onstage rant at Brazil’s SWU festival last weekend (November 13) – scroll down to the bottom of the page and click to watch.

The Hole singer stormed off the stage at the Sao Paulo bash after a crowd member held up a picture of her late husband Kurt Cobain during the gig, and only returned after her entourage convinced the crowd to chant: “The Foo Fighters are gay”.

She then made a thinly veiled dig at the former Nirvana drummer, telling the audience: “I don’t care what you listen to at home, but if a guy takes off money off my kid’s table, f**k him.”

In an interview recorded after the show, she continued to criticise Grohl for making money from the Nirvana name even though he “didn’t write one f***ing note” for the band.

“I wasn’t in Nirvana,” she said. “However, I do own Nirvana, with my daughter, and because of tax laws I have to give money to his sister, Kim Cobain, and [Kurt’s mother] Wendy Cobain.”

She then went on to add: “Dave makes $5 million a show, he doesn’t need the money – so why the fuck does he have a Nirvana Inc. credit card and I don’t? And last week, he bought an Aston Martin on it.”

The singer also claimed that Kim Cobain was homeless and lived under the same bridge Cobain mentioned in the track ‘Something In The Way’ from their 1991 album ‘Nevermind’, and also downplayed Grohl’s significance to Nirvana, adding: “He didn’t even write the drum riff for ‘Smells Like Teen Spirit’. Kurt owns 100% of that publishing.”

She concluded by saying: “Forget me, I make tons of money – my daughter and Kim Cobain, Wendy Cobain and [Kurt’s half-sister] Brianne Cobain is what I care about.”

Hole are currently touring the world and recently pulled out of a planned stint on Australia’s Soundwave Festival after Courtney Love discovered that her band would be below Limp Bizkit on the bill.