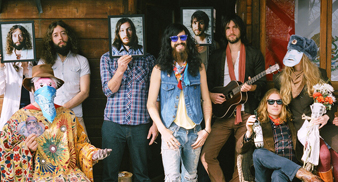 Uncut will be bringing you festival news, blogs and pics all weekend live from Reading, so take a look at Uncut’s festival blogfrom this Friday, August 24

From a distance Devendra Banhart is easily confused for a Hell’s Angel; bushy beard, long hair, psychedelic glasses and the denim jacket seem a dead give-away. But look again and you will see a hippy and a poet that radiates love of music.

Banhart will be playing the Radio 1/NME stage in Leeds on Friday and in Reading on Saturday. He will be showcasing tracks from his fifth album “Smokey Rolls Down Thunder Canyon”, which details Banhart’s break-up with Bianca Casady of CocoRosie, as well as playing through tracks from his back catalogue of beautiful acid-folk songs.

The new album is an experimental mix of gospel, reggae and South American balladry inspired by his upbringing in Venezuela in which he departs slightly from the acid-folk sound of his previous albums.

However, the superb song-writing skills that transcend musical genres are evident in all of his albums and make Devendra Barnhart irresistible at times. Others have described his music as cathartic and encyclopaedic, so don’t resist, if you’ve never heard him play, you’ll be enthralled.

Banhart will be joined on the Radio One/ NME stage on Friday in Leeds and on Saturday in Reading, by Klaxons, LCD Soundsystem, CSS, Jamie T, Cold War Kids, The Maccabees, The Sunshine Underground, New Young Pony Club, Hadouken, Pull Tiger Tail and Late of the Pier.