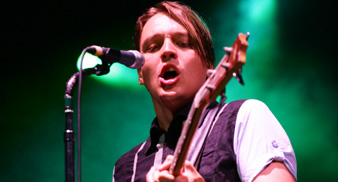 Uncut will be bringing you festival news, blogs and pics all weekend live from the Carling Weekend: Reading, so take a look at Uncut’s festival blog from tomorrow.


When the prestigious ‘Time’ magazine had Arcade Fire on its front cover in 2005; the band was a world phenomenon. Their debut album “Funeral” – which was given its name as several family members of the band died during the recording – was the darling of the music world. Critics loved it; fans bought it.

Playing the Reading Main Stage on Saturday and in Leeds on Sunday, Arcade Fire will be showcasing tracks from their new album, “Neon Bible”, in tandem with earlier hits such as “Power Out” and the brilliantly unique “Rebellion (Lies)”.

Arcade Fire’s meteoric rise from obscurity had often been accredited to the use of unusual instruments by the Canadian octet: xylophone, French horn, accordion, hurdy gurdy, harp and mandolin are amongst many used in “Neon Bible” and “Funeral.” However, it’s the capricious voice of lead singer and band co-founder Win Butler hovering over the epic pitch that makes their sound transcend musical tastes and endear them to the ear.

If “Funeral” – contrary to its name – was a vehicle of dreams and life’s greatness, then “Neon Bible” is a far darker affair. In the end however, the wonderfully jittery “The Well And The Lighthouse” and the calamitous epic “Windowswill” contradict morose tracks such as “Black Wave/Bad Vibrations” and “Keep The Car Running”.

Arcade Fire are a band with a lot to say, and their musical expression is art at its finest. Be it gloomy intensity or the uproar of life, their performances burst with energy infrequently seen on stage. Their festival performances this weekend should be special, and definitely worth a look to waken the senses.

Arcade Fire will be joined on the Main Stage in Reading on Sunday and Leeds on Saturday, by Red Hot Chilli Peppers, Bloc Party, Panic! At The Disco, Angels and Airwaves, The Shins, Eagles of Death Metal, Dead 60’s and Paramore.