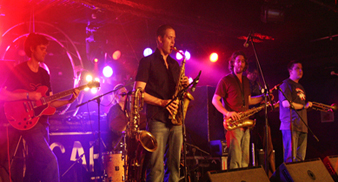 The saxophonist who was a member of soul group the Haggis Horns (pictured above) was found at a Leeds flat on Saturday of a suspected drug overdose, initial reports have said.

West Yorkshire police are currently awaiting the results of a toxicology report.

Officers investigating Rae’s death arrested a 32-year-old man on suspicion of supplying controlled drugs, but he has been released on bail pending further inquiries.

The Haggis Horns have previously performed with Corinne Bailey Rae as well as Amy Winehouse and Mark Ronson.

Bailey Rae has not yet made a public statement, however her record label said on Sunday (March 23) that: “EMI Records would like to offer its sincere condolences to Corinne Bailey Rae and the Rae family at this tragic time.

It added: “We ask that the media respects Corinne’s privacy and that of her entire family.”