Paul Simonon's Spanish paintings to be exhibited for the first time 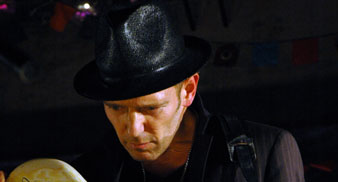 Clash legend Paul Simonon is to exhibit a selection of his Spanish themed oil paintings, at his first art show since 2002, from Thursday (April 17).

The paintings, which centre around the world of the matador, were studied and sketched in Madrid, at the Las Ventos del Toro bull fighting arena and go on show at Thomas Williams Fine Art gallery in Old Street this week.

The bassist, who now plays with Damon Albarn in The Good, The Bad & The Queen completed the oil paintings from the sketches at his London studio so that he was “no longer a slave to reality and could take liberties” according to the gallery’s description.

Simonon’s last solo art exhibition was of scenes painted of the River Thames, shown in 2002.

The new exhibition runs until May 9. Opening hours are 10 – 6pm.