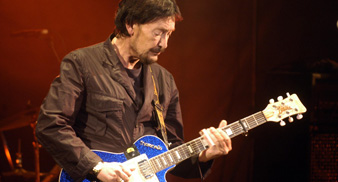 The singer/guitarist is back from ‘early retirement’ with a newly formed quintet, The Fabulous Hofner Blue Notes – and has prepared over 20 new songs in homage to iconic 60s blues music.

Rea and his band will kick off the UK shows in Cardiff on March 13 – and the stint will also include a show at London’s Royal Albert Hall.

Serious illness which initially caused the singer to announce he would have to quit music two years ago has not stopped him from creating a new, looser, way of performing on stage – hence the quintet’s formation.

Rea said in a statement: “I love being on tour. That’s the best job in the world, if only I had a different body. My state of health can deteriorate any moment, however, which is why I simply had to find a different way of working.”

In the past two years, the guitarist has written a new guitar book called ‘The Return of The Fabulous Hofner Bluenotes’ – dedicated to early 60s guitar – and also including 20 brand new songs, and a new album is due for release this December.

Rea says of the bluesy tributes to his idol BB King: “That is the music that I have always wanted to play: real, genuine guitar music”.

The band’s full tour dates are as follows: