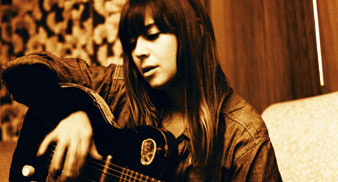 Cat Power has announced a one-off gig in London next month. The gig precedes a hotly anticipated tour, dates of which have not yet been announced.

She will be backed by the Memphis Rhythm Band at the gig at the Camden Roundhouse on November 1.

The Memphis Rhythm Band, led by Chan Marshall, is an all-star troupe.

Including Al Green’s guitarist and songwriting partner Mabon “Teenie” Hodges, as well as Booker T and the MG’s drummer Steve Potts and other top Memphis musicians on keyboards, horns and strings, they are one of the best backing bands in the business.

Cat Power’s third single, the jaunty “Could We”, is out on October 30 and is taken from the universally acclaimed album ‘The Greatest’.

The B-side of the single features a stunning rendition of the Everly Brothers’ classic ‘All I Have To Do Is Dream’.