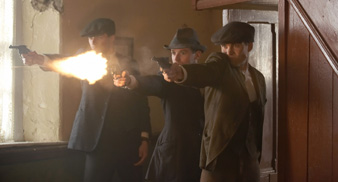 Uncut is sitting just yards from the Palais on the final night of the Cannes film festival, where an ecstatic Ken Loach has just defied legions of Croisette clairvoyants by winning his first ever Palme d’Or with the stirring Irish Civil War saga The Wind that Shakes The Barley. The festival’s other big British triumph is Andrea Arnold’s Jury Prize winner Red Road, a beautifully crafted psycho-thriller about surveillance, sex and revenge set in a Glasgow tower block. Opening in the UK later this year, both are highly recommended.

After a slow and underwhelming start, Cannes definitely stepped up the quality level in its closing week. Babel, the epic new globalised multi-plot melodrama from Amores Perros and 21 Grams director Alejandro Gonzales Inarritu, put audiences through the emotional mangle in four different languages. Meanwhile his friend and fellow Mexican superstar director Guillermo Del Toro delivered the fantasy rollercoaster ride of the festival with Pan’s Labyrinth, a supernatural fairy tale set in fascist Spain soon after the Civil War. Two very different films, both of them excellent.

As ever at Cannes, the festival fringes have thrown up some of the finest, weirdest movie moments. Like the night time beach screening of Daft Punk’s Electroma, a psychedelic sci-fi road movie directed by the Parisian techno duo with a nod to arthouse classics by Antonioni, Kubrick and early George Lucas. Although the film stars the pair’s iconic robot characters, it contains none of their music and no dialogue. Most critics hated it but Uncut was mesmerised. Almost as trippy was Richard Linklater’s A Scanner Darkly, an innovative and very funny sci-fi stoner comedy starring Keanu Reeves, Winona Ryder and Robert Downey Jr in heavily stylised, semi animated form.

At the packed screening, Smith was greeted like a rock star. “It’s a massive, massive fucking honour to be here,” the cult writer-director announced as he bounced onstage in tuxedo and surf shorts. “I feel a little awkward to be honest with you… I feel a little gay, but not gay in that awesome cock-sucking way.”