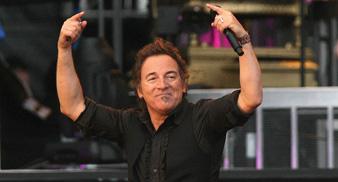 Bruce Springsteen has been announced as the first headliner of next summer’s Isle Of Wight Festival and London‘s Hard Rock Calling festival.

The singer, who is currently putting the finishing touches to his 18th studio album, will make his first appearance at Isle Of Wight Festival on June 24, headlining the festival’s closing night.

He will also top the bill at the London festival, playing the Hyde Park event’s Saturday night (July 14). Springsteen has also confirmed two huge stadium shows for next June. He will headline Sunderland‘s Stadium Of Light on June 21 and Manchester‘s Etihad Stadium on June 22.

Springsteen is expected to announce further European tour dates in the coming weeks. He has also said recently that his new studio album is almost complete, but remains untitled at the moment.

Tickets for the Hard Rock Calling go onsale on December 3 at 9am (GMT). To check the availability of [url=http://nme.seetickets.com/Tour/Hard-Rock-Calling?affid1nmestory] Hard Rock Calling tickets[/url] and get all the latest listings, go to [url=http://www.nme.com/gigs]NME.COM/TICKETS[/url] now, or call 0871 230 1094.