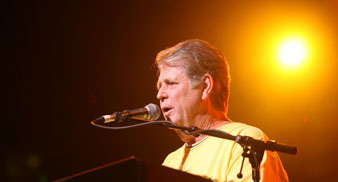 Any trepidation about the words ‘brand new songs’ were instantly dispelled as Wilson and the band performed beautiful paen-like pop songs in a similar style to early Beach Boy songs like ‘Dance Dance Dance.’

‘That Lucky Old Sun’ is co-written with Scott Bennett and interspersed with narratives by ‘Smile‘ lyricist Van Dyke Parks.

While the narratives were spoken – a montage of images to go with the words flashed up on the screen behind Wilson; from Coyotes to 60s surfer girls to images of his former Beach boy bandmates and his late brothers Dennis and Carl. The photos from his past brought much sentimental applause from the audience.

The new songs were enthusiastically received, with a complete standing ovation lasting 20 minutes at the end of the 40 minute set.

Wilson returned to the stage after an encore of hits which included Chuck Berry’s ‘Johnny B Goode’ and ‘Good Vibrations’ with a song he said, that “McCartney played to me before he recorded it in 1967.”

“It brought tears to my eyes,” he added. Wilson then played a brilliant rendition of ‘She’s Leaving Home’ – marking the 40th anniversary of the The Beatles‘ ‘Sgt Pepper’s Lonely Hearts Club Band’ album release.

Earlier in the show, before the new songs were premiered, Wilson played a selection of rarely performed early Beach Boys classics. Many were taken from the 1965 album ‘Today!‘ including ‘Dance Dance Dance’, ‘Do You Wanna Dance’, ‘When I Grow Up (To Be A Man)’, ‘She Knows Me Too Well’ and ‘Please Let Me Wonder’.

‘Girl Don’t Tell Me’
‘Dance Dance Dance’
‘Salt Lake City’
‘Catch A Wave’
‘Then I Kissed Her’
‘In My Room’
‘Do You Wanna Dance?’
‘When I Grow Up (To Be A Man)’
‘She Knows Me Too Well’
‘I’d Love Just Once To See You’
‘Do It Again’
‘Please Let Me Wonder’
‘California Girls’
‘Sloop John B’
‘Wouldn’t It Be Nice’
‘God Only Knows’
‘Heroes And Villains’
‘Good Vibrations’


The London residency continues tonight (September 11) with the second of six nights at the Festival Hall.

There’s a review of the September 12 show at Uncut’s Wild Mercury Sound blog.


The rest of the tour dates are:

To check ticket availability for the Festival Hall shows, click here for southbankcentre.co.uk.