The film opens in the UK on July 10 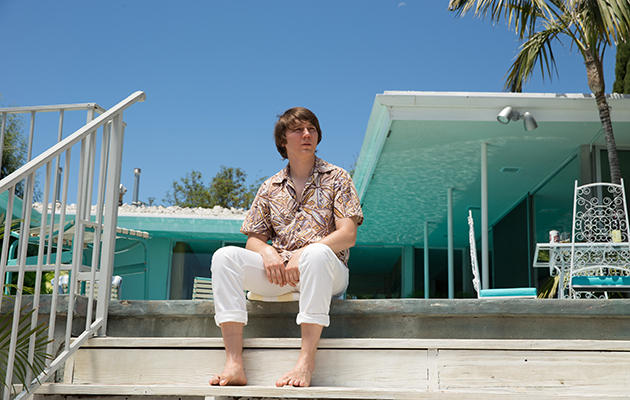 Even by the standards of his contemporaries, Brian Wilson has lived an unusually eventful life. The many remarkable musical highs have often been overshadowed by the vicissitudes of his personal and family life; and while a less intuitive filmmaker might be tempted to try and cram the whole kit and kaboodle into a biopic, director Bill Pohlad and screenwriter Oren Moverman have opted instead for a more nuanced take on their subject. Love & Mercy cuts between Wilson in 1966 and in 1985, exploring resonances between the two stages of his life and attempting to show how Wilson got from ‘there’ to ‘here’. It is a canny strategy that mostly works; if admittedly it provides a narrative structure that at times feels a little too neat.

The idea of a Wilson biopic appears to have been under discussion for over 20 years: at one point, William Hurt was in talks to play Wilson with Richard Dreyfuss as his therapist, Eugene Landy. In this incarnation, the script comes from Moverman – who did such commendable work on the Bob Dylan film I’m Not There – while Pohlad is best known as a producer on films including Brokeback Mountain and 12 Years A Slave. Together, Pohlad and Moverman have concocted snapshots of Wilson at two key periods in his life: the recording of Pet Sounds in 1965/6 and the end of his troubling relationship with Landy two decades later. To aid them in this endeavour, they have two Brians: Paul Dano as the podgy ‘60s Brian, his head full of wonder, and John Cusack as the older version, still very much a “little boy in a man’s body”. They discretely attempt to tie the two periods together, suggesting that the breakdown Wilson suffers in the Sixties accounts for his condition in the later years. But it also attempts – perhaps a little too hard – to find parallels between the two eras. In the Sixties, Wilson is dominated by his father, Murry, and in the Eighties by Landy, another overbearing presence of questionable integrity. We are shown how Wilson’s love for music nearly broke him but also how love eventually redeemed him.

Both Dano and Cusack are excellent, although rather weirdly Cusack looks a lot like Nicolas Cage. We meet Dano’s Wilson at the point where he is becoming constricted by the parameters of the band’s early hits; he can already hear in his head the music that eventually coalesces into Pet Sounds. “I can take us further if you let me stay at home and work in the studio,” he explains, begging off the band’s forthcoming Japanese tour. The sequences recreating the sessions for Pet Sounds are unusually strong. Rock biopics often struggle to satisfactorily convey the creative processes, but Pohlad delivers strong material here as Wilson bustles around the studio with the Wrecking Crew, evidently at his happiest, finessing notes on sheet music or bringing in his two dogs, Banana and Louie, to provide backing vocals. “Can I get a horse in here?” He asks enthusiastically. Later, a 360 degree panning shot during the sessions for “Good Vibrations” shows how far Wilson has moved away from his fellow Beach Boys: while he intently discusses the tempo of the strings, his brothers and cousin are pictured listlessly staring at magazines, on the telephone or simply looking bored. It’s all too much for Murry – “There’s not a hit on that album” – and Mike Love: “You’re letting us down!” By the time of SMiLE, it has all overwhelmed Brian.

Pohlad is extremely good at recreating period detail – whether it be the warm, panelled interiors of United Western Recorders’ Studio 3 in 1965 or, later, the airless glass and metal environment of Eighties’ Los Angeles. If Dano’s iteration of Wilson is predicated around a kind of puppyish enthusiasm for music, Cusack’s older model is inevitably more damaged – a “Lonely scared frightened”, as he writes on the back of a business card. Cusack does well here; he artfully navigates Wilson’s medicated tics and mumbles in a way that allows for a warmer person to emerge in the background. While Dano pretty much carries the early period, Cusack is joined in the Eighties by Elizabeth Banks as Melinda Leadbetter – who becomes Wilson’s second wife – and Paul Giamatti as Eugene Landy. Leadebetter is very much presented as the rescuing angel who prises Wilson from Landy’s pernicious control; admittedly, this might be simplifying the truth to a degree, but it provides Pohlad and Moverman with the narrative resolution they require. Banks and Giamatti do the best with their roles, though this is closer to conventional drama in comparison with the more inspired handling of the Sixties’ period.

A climactic, 2001-style sequence which unites the two Brians to the heavenly sounds of the Beach Boys’ music might appear a trip too far: nevertheless, it is a poetic gesture that Pohlad and Moverman have arguably earned.