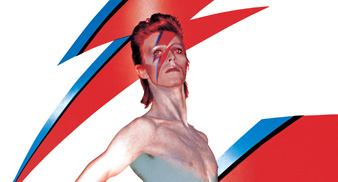 Brian Duffy, the legendary 60s and 70s rock photographer has revealed where the inspiration for the iconic shots of David Bowie came from for the ‘Aladdin Sane’ album artwork.

Speaking to the BBC about the cover shoot for the 1973 album, Duffy explains: “Bowie was interested in the Elvis ring which had the letters TCB [taking care of business] as well as a lightning flash.”

So, using the logo from a Panasonic rice cooker which was in the studio as inspiration, together with make-up artist Pierre La Roche “Drew on his face the design… [we] used lipstick to fill in the red.”

An exhibition featuring Brian Duffy‘s work is to go on show in London, at the Chris Beetles Gallery on October 15.