The New Jersey rockers to play stadiums next Summer 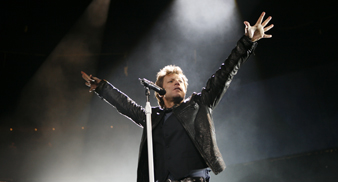 Bon Jovi have confirmed that they will be bringing their ‘Lost Highway’ stadium tour to the UK next Summer.

The rockers, who kicked off their world tour in the US last week, are to play six shows next June, kicking off at Southampton‘s St Marys on the 11th.

More worldwide tour dates are due to be announced soon – see www.bonjovi.com for more details.

More than 90 concerts have already been scheduled in 16 countries – including Canada, Japan, the U.S., New Zealand, England, Ireland, Scotland, Germany, Holland, and Austria.

The US leg of the tour started in their home state of New Jersey, in Newark, on October 25, with ten shows at the Prudential Center and will now call at the following venues: