Album isn't officially out until next Monday (June 20) 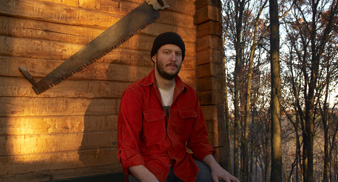 Bon Iver are streaming their new self-titled album online – scroll down to the bottom of the page and click to hear it.

The album, which is the follow-up to the band’s 2007 debut LP ‘For Emma, Forever Ago’, isn’t formally released until June 20. It features ten tracks, with each song named after or representing a place.

Frontman Justin Vernon has previously said that album closer ‘Beth/Rest’ is his favourite on the album, saying: “It’s definitely the part where you pick up your joint and re-light it.”

Bon Iver tour the UK in October, playing six shows in all. The gigs begin at Manchester‘s O2 Apollo on October 19 and end at Bristol‘s Colston Hall on November 11. The trek includes two sold-out shows at London‘s HMV Hammersmith Apollo.

The band are not scheduled to play any UK or European festivals during the summer.