Surprise stop off on Bob's US tour 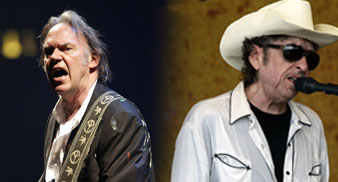 Bob Dylan has made a surprise visit to Neil Young‘s childhood home on Grovesnor Avenue, Winnipeg, whilst on tour in the US.

Current owners of the house where Young lived in the early ’60s, John Kiernan and Patti Regan, claim that Dylan turned up in a cab on their door step two weeks ago, the day of his MTS Centre concert.

Kiernan says that they spent around 25 minutes talking to Dylan about the house and neighbourhood as well as making small talk about the weather.

When the house owners took Dylan on a tour of the house, and showed him Young’s former bedroom, used now by Kiernan’s 16-year-old daughter, he said: “So this is where Neil would have listened to his music.

Kiernan also told Dylan about the Earl Grey and Crescentwood community centres, where Young and his bandmates played their first concerts.

Kiernan summarised his encounter with the legendary songwriter by saying: “He was introspective and thoughtful. He had an interest in music beyond himself.” He called him “Bob,” but Kiernan commented, “This was a guy who doesn’t shake hands or introduce himself.”

To read the full story, as told to the Winnipeg Free Press, click here.